While I wait for DHL to drop my Mi Pad 2 Windows version off to me today, I noticed that GearBest has a Mi Pad 2 Dual Boot version listed. I see nothing about it on the Xiaomi Weibo, only Xiaomi Mi5 teasers for the 24th. So is it a leak that’s yet to be announced?

It’s a 64GB model (16GB Dual OS wouldn’t work!) and it’s up for preorder at a rather pricey $285 ouch. I’ve already reviewed the Mi Pad 2 Android version and it impressed me with the fully laminated 326 PPI retina screen, Apple Mini 4 like build and just quality all around compared to the other 8″ plasticity Atom X5 Z8300 tablets.

However, that model was the cheap, $185 Android 16GB version. I remember someone said in the comments make it dual OS and 64GB I’ll pay even $300 for it, well it seems your wish came true. It does look great, but is the premium worth it for the best 7.9-8″ dual boot? I would say yes having used it if that price drops somewhat after release.

If only it had 4GB of RAM and MicroSD support then it would be the almost perfect mini dual boot tablet… I would also like to see Xiaomi bring us a 9.7″ Retina tablet with dual os, slim Tab S2 like build and fully laminated screen of course. 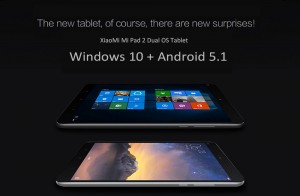