Late 2016 saw the release of the new Kaby Lake processors from Intel. The Teclast X5 Pro is one of the first to use this new chipset, the Intel Core M3-7Y30 which has a maximum turbo of 2.6Ghz and offers increased performance over the last generation  Core M3-6Y30. And benchmarks do show it’s a nice step up over up in terms of raw CPU speed. The GPU also has some improvements in was of better codec performance such as H.265 10bit 4k files decoding and transcoding.

Teclast is also the only one of the Chinese brands I typically review that opts for 8GB of RAM instead of the now stand 4GB’s. The RAM spec is DDR3L running at 1600Mhz in dual channel. If it was configured at the maximum 1866Mhz supported, GPU performance would see a nice little bump. But as it stand’s the X5 Pro performs well and will even permit some gaming with decent frame rates at the native 1920 x 1200 screen resolution. (League of Legends & Counter Stirke Global Offensive for example) Below is the detail video review:

The design of the Teclast X5 Pro is very familiar, kickstand and type cover. Something Microsoft started with the Surface Pro line of Windows tablets. And it’s a deisng that works quite well. The kickstand stand only allows for two positions, the second I find the best angle when seated at a desk. The build of the tablet is very solid and well made. A bit on the heavy side coming in at 1.5 kilos on my scales (Including the type cover) This a good 200 grams or so heavier than the Surface Pro 4. But I think it might have something to do with Telecast using some copper in there for heat dissipation and a thicker alloy housing to distribute heat away from heatsink & CPU. 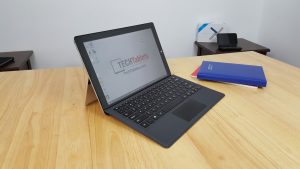 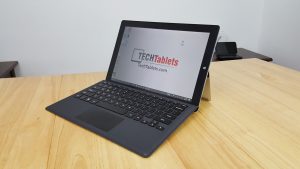 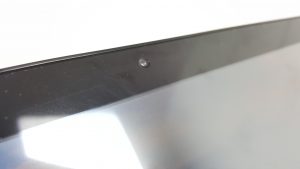 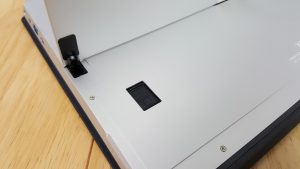 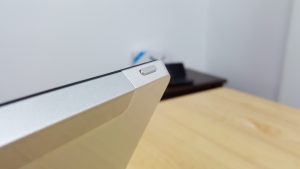 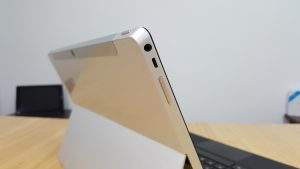 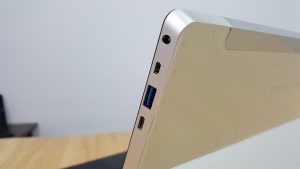 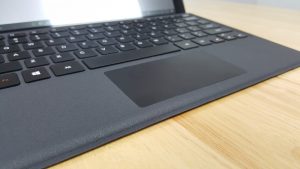 Keyboard:
The optional type cover is spacious and okay to type on, my main issue with the type cover is while I can type quickly error free I find the bounce the keyboard has to be annoying. If it was only a little more rigid like the Cube i9’s type cover or the Surface type cover. This would have greatly improved the typing feel and feedback from the keys.

The touchpad accuracy seems average, it’s usable and has hardware mouse keys. Supports gestures, but overall rate it as a 7 out of 10 touchpad. Not really great. It does the job, that’s about it.

One of the disappointing areas of the X5 Pro, while the 1920 x 1200 IPS has good black levels and colors the display isn’t fully laminated, something I could forgive if it was a bright panel. But possibly for battery saving reasons, Teclast has this panel only producing around 190 lux at the maximum brightness setting. Ideally, I would like at least 250 lux on a tablet screen. So with only 190 brightness maximum this tablet is only good for indoors. I doubt you’ll be able to see the screen well outdoors.

At least the non-laminated gap between the touch digitizer and IPS panel is only around 1mm. 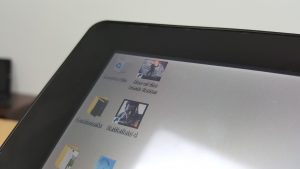 Benchmarks like Geekbench 4 show the Core M3-Y30 is a nice step up in performance over the Core M3-6Y30 used in the X3 Pro. The Sata 3 240GB is a Forsee unit which okay speeds. Of course not a patch on the likes of NVMe SSD drivers now being used in high-end tablets and notebooks. 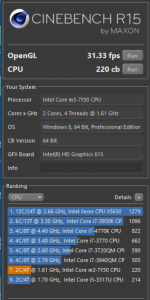 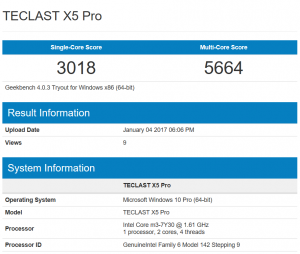 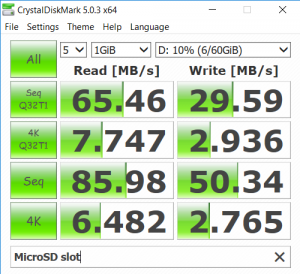 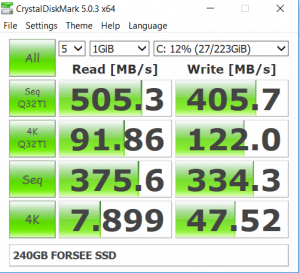 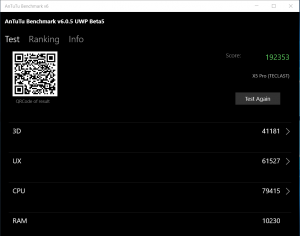 8GB of RAM also helps when it comes to multitasking and applications that need more than 4GB. (Games like GTA V used around 6GB of RAM) GTA V was playable frame rates around 21-35 fps. When running low settings. Battlefield 4 was even playable, but not the great frame rate, but still a marvel it can run like that on a fanless tablet.

If you missed my unboxing, I was disappointed in the Type-C port, it’s only USB 3.0 and not USB 3.1 spec which I think is a real shame. It’s meant to be able to charge the tablet also via type-c,  Edit: the latest bios update and EC update from Teclast (Found in our downloads section) fixes this issue. The X5 Pro now charges from the Type-C port. 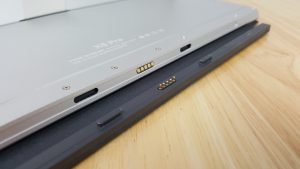 The port locations all at the top aren’t the greatest. I think Teclast should have placed the speakers ate the top and the ports toward the bottom of the device. The MicroSD card slot, liek the Surface Pro series, is hidden away behind the metal kickstand.

The Intel 3165 Dual Band Wireless chip performed great, very fast 300mbps+ speeds at of my wireless AC router. Wifi range is also great thanks to the plastic strip at the top where the antennas are and a dual antenna design.

One area that really did impress me. Teclast did a great job with cooling the Core M3-7Y30. Temps stayed around or under 80 degrees. And it ever once triggered any thermal throttling. Only when I used intel XTU and pushed the power limits beyond stock settings did the CPU throttle.

Teclast went with two front firing speakers, this is a great move however, they aren’t the loudest and offer almost no bass. Luckily the 3.5mm headphone out quality is decent. No static and a good level of volume. But if you’re driving a large gaming headset it might fall short in volume output.

Core M’s for me have never lastest long enough when it comes to battery endurance. The Teclast X5 Pro is only capable of around 5 hours use, this is with wireless on, 50% brightness and general web use. Using Chrome and writing up this short summary. Disappointing results. But even my Surface Pro 4 struggled to get over 5 hours.

The Teclast X5 is a solid well-made tablet with a few flaws that really shouldn’t be present. Teclast should have thought more about the port location on the tablet, moving the ports to the top and to use a proper fully spec’d a USB 3.1 type-c port like Cube has since the i7 Book and select a brighter screen, at only 190 lux this fine for indoors, but if you’re in a well lit or bright area you would be wishing for a few more levels of brightness.

However, performance is great scoring well in benchmarks and handling everything I threw at it well, including some very demanding games. The keyboard is okay, but keyboard bounce means it’s not the greatest type cover I have used.

Once the price from retailers eventually falls, the X5 pro isn’t a bad tablet at all for those after 8GB and the most power out of a fanless. And if Teclast can release a bios update to increase the screen brightness, fix type-c charging then that’s two of my cons ticked off the list.