Intel’s NUCs currently come in two forms: kits, that is, without memory, storage and usually with high CPU performance, such as Bean Canyon announced yesterday, meanwhile miniPCs come with pre-installed with memory, storage, Win10 and are ready to use.

Today, August 16th, Intel officially launched the Crimson Canyon powered NUC 8 Home miniPC in the same compact size of 117x112x52mm we had in previous generations, this time though, they’ll be powerful enough to run light online games such as League of Legends, CS:GO and Team Fortress 2 at 1080p resolution.

The NUC will be available in two variants: model number NUC8i3CYSM for the 8GB LPDDR4 model and NUC8i3CYSN for the version with 4GB of RAM. They will both sport an Intel Core i3-8121U, which isn’t as exciting as the previously rumored 10nm Cannon Lake, but nonetheless should bring a decent upgrade over the previous gen. 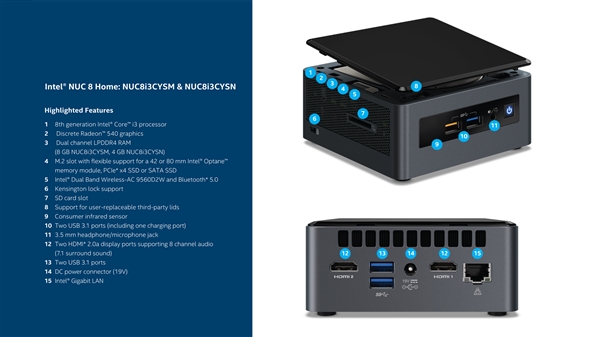 On these miniPCs we’ll then find AMD Radeon 540 with 2G of GDDR5 dual channel memory graphics, a 2.5-inch 1TB mechanical hard disk, an SD card slot and an M.2 slot with support for a 42 or 80mm Intel Optane memory modules, PCIe SSD or SATA SSD.

Of course, we also have Intel’s Dual Band Wireless-AC WiFi and Bluetooth 5.0, meanwhile ports include four USB 3.1 ports (one for charging), a 3.5m audio jack, two HDMI 2.0a ports, a DC power connector (19V) and an Intel Gigabit LAN port. Additionally, there’s an infrared sensor for consumer use.

Intel said that the Bean Canyon NUC kit and the Crimson Canyon NUC miniPCs will be available in major retailers around the world in the month of September. Pricing hasn’t been officially announced yet, but some stores have put the devices on presale at $529 for the 4GB model.