Another highly requested item for me to review since its release. I waited for the price to drop and also my interest in the item peaked after permit only parking was introduced where I have the apartment. The Xiaomi M365 scooter or Xiaomi Mijia Scooter it’s called is an electric scooter with a claimed range of up to 30kms. It’s got two air fill rubber 8.6″ tires, 250w front hub motor (peaks at 500watts) The battery capacity is 280Wh, takes 5 hours to fully charge. Overall I’m really enjoying this scooter, it’s not perfect but the main thing is it’s stable, easy to ride and very well design with a great build quality. I got this in the end from Gearbest, here is the listing. Coupon JUANM365 lowers the price to $349.

One thing that bugs me is the claimed range of 30kms. I guess that my range using it will be around 15kms max on normal mode and about 18 km’s on the eco mode setting. Xiaomi must have used a flat test track oval, found the smallest lightest child around to ride on it and all on a wind free day to achieve that 30kms!

The another issue is the tires, just like any bike they are susceptible to being punctured. I found out today first hand! Just my second day with it somehow I managed to pick up a rose thorn in the front tire and was left to walk 20 minutes pushing it. As a mountain biker, I swear by those anti-puncture inner tube liquid solutions. So of to the bike shop to buy a some Slime. I added it to both wheels, pumped it up and it sealed the hole from the thorn. Now that it’s in both tubes it should protect me against any further flats. It’s not 100% failsafe, but better than nothing. Failing that, there is always the option of installing two hard rubber tires but this sacrifices some ride comfort as the air inner tubes absorb a lot of the bumps and rough surfaces.

My disk brake was poorly aligned, barely working and had to be fixed. The issue was the inner brake pad which I thought might be missing, was just wound out too far. The small allen key screw that locks it in place loosened in transit and this was the source of the problem. I had to realign and screw it in more. Now fixed, the scooter brakes really well, much better than in the above review.

Some further info on the Xiaomi scooter:

I first paid $449 pbut it’s now selling for $349 at Gearbest, with coupon JUANM365 I’m overall happy that there were no customs fees involved.

Ordered the 15th as seen below. It was then delivered on the 30th of May with no damage. Not bad at all, came via the UK. 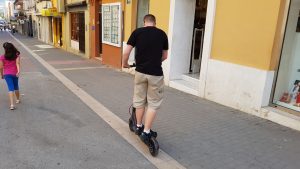 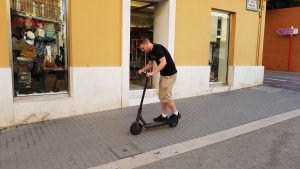 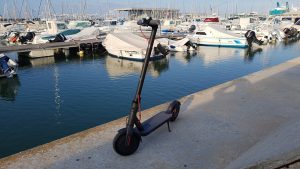 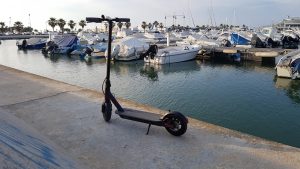 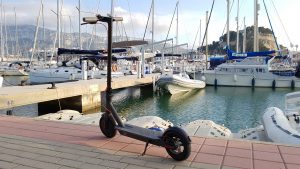