Just as we were expecting at this time of the year, Intel launched a new lineup of processor that join the 8th generation family. We’re talking about the U-series (code-named Whiskey Lake) and Y-series (code-named Amber Lake); both series are set to bring better connectivity, increased performance and improved battery life.

These two series of CPUs are of course for mobile use, as laptops and 2-in-1s. They do indeed equip an integrated Gigabit Wi-Fi module for the first time, which will deliver up to 12-times faster speeds compared to something like the older Intel Core i5-4200U. In addition to that, we’ll also get an up to 2 times increase in performance over the five-year old i5-4200U and two-digit improvements in web browsing and light content creation compared to the previous generation.

According to Intel, these new CPUs are a leap forward as far as connectivity goes, allowing people to create and consume online content much more quickly. You can for example share 4K or 360-degree video content around 6.5 times faster or stream and play videogames without hiccups. Another neat upgrade will also allow better interactions with voice services on the U-series, meanwhile the Y-series will get improved natural input options like touch and stylus. 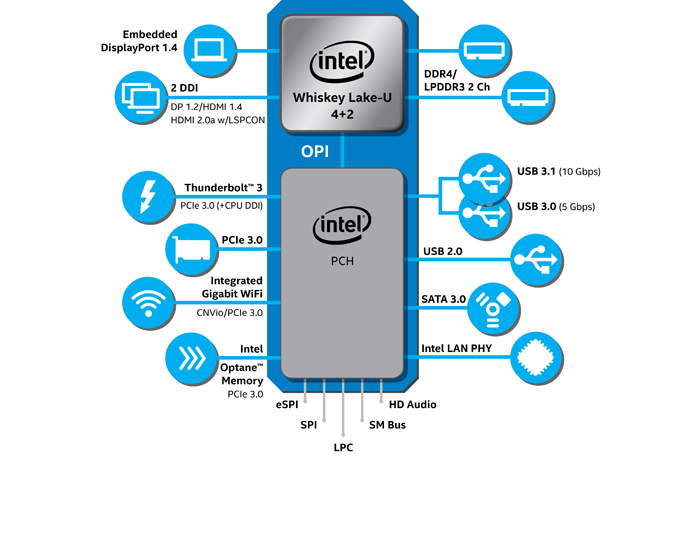 Intel’s 8th Gen Core U-Series (Whiskey Lake) processors comprehend the i7-8565U, i5-8265U and i3-8145U; they’re set to deliver the best performance you can get out of a 15-watt TDP with up to four cores and eight threads. Other features include:

We then have Intel’s 8th Gen Core Y-Series (Amber Lake Y) processors which include the i7-8500, i5-8200Y and m3-8100Y. These are of course more focused on bringing a smoother experience into super thin and light devices and 2-in-1s. Other neat features on board are:

So, when are we getting these two series? Well, according to Intel, they will be available from PC manufacturers beginning this fall, so not too far!