If you caught my review of the Coffee Lake Core i7 8750H Aliexpress mini PC, this is very similar. Exactly the same design, cooler, PSU and build all except for the CPU. This has the quick Core i9-8950HK and being a K series CPU just like the desktops it’s unlocked and overclockable. Like the 8750H it has the 6 cores, even if it’s badged as a Core i9 it’s not a true Core i9 but still crazy fast for a mobile CPU. The onboard CPU cache is also up 3Mb to a total of 12Mb on this chipset. This mini PC cost me $533 including delivery on Aliexpress here.

The stock clocks are, turbo 4.8Ghz and a base clock of 2.9Ghz, this by itself is a nice bump up over the Core i7 8750H’s which is 4.1Ghz max turbo and a base of 2.2Ghz. The TDP is still 45W and the cooler (A desktop one) is the same. But where the fun starts is overclocking this little beast. With a little overvolt of 0.40 volts, I’ve been able to hit a crazy 5.2GHz something I cannot even do that on my desktop i7 8700K @ 5Ghz and as a result, I can post single thread Geekbench 4 scores faster than my desktop! And is about a 20% faster single core score and 15% multi over the Core i7 8750H model. 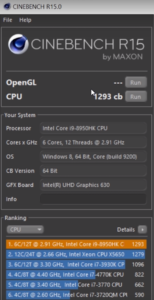 But multi-threaded load the CPU will only turbo to about 4.0GHz to 4.2Ghz depending on the load (Cinebench R15 for example which scores about 1300Cb max). Encoding 4k video which is the reason I bought this it can hold the cores much higher are 4.5Ghz. What’s limiting the CPU is current limiting throttling according to Intel XTU. This is either the bios settings, VRM’s or the 90W power supply at its peak. 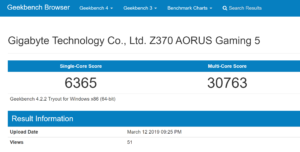 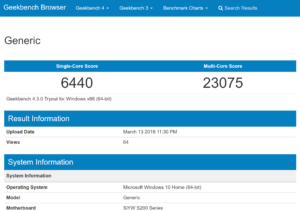 Thermals and fan noise remain great, a desktop cooler on a laptop CPU works wonders and even at 5.Ghz+  it will not go over 80 degrees C. The fan when idle cannot be heard unless you put your ear to it. It’s surprisingly not only quite, but cool. When pushed underload you’ll hear the fans whirling noise, but it’s not offensive and you rarely hear it. If you want more details on this please see my first review on this model.

For more details please catch my video review below:

The Core i9 8950HK version is approximately $140 USD more than the Core i7 8750H version. Unless you need the absolution best performance in a tiny package I recommend just getting the i7 8750H as it will fine for most peoples needs. If you want to encode and edit 4k videos, for example, faster then it’s an option.

And if you want to game one of these NVME to eGPU to stands will do the trick and it’s faster than Thunderbolt 3!