This arrived yesterday, one of only two items that made the Chinese Spring Festival close down 2th to 14th most sellers have. It’s like the Onda oBook 11 I reviewed, but a larger 13.3 inches. It’s a shameless Lenovo Yogo 2 clone that doesn’t hide the fact. Looks very similar and copies that 360-degree hinge. It must be made by the same ODM as the oBook 11.

Only recently Voyo announced there will be a Skylake vBook v3 version of this laptop, I’m a bit annoyed, but at least it will allow me to test out and preview the everything apart from the Core M3-6Y30 power on it. Could be a cheaper blessing in disguise if this vBook turns out to be a lemon. I picked it up from GearBest, $232 dollars on one o their flash sales. But I’m a bit pissed I was asked to pay $14 more on the DHL postage due to the weight of the box. I was offered a refund or pay the extra and GB could send it out. They still take photos of the packet and label which is a nice extra no other retailers do. 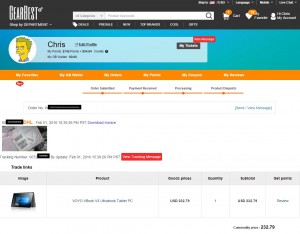 More to follow in the TT YouTube channel. I’ll benchmark it and do my usual tests including some gaming.