Onda kicked off a press event today and posted quite a bit on their new Core M 5Y10 powered tablet on Weibo. It’s called the Onda V116w Core M, luckly it’s not the same v116w just with a Core M I reviewed a couple of months back.

Like the Cube i7, Pipo W8, Teclast X1 Pro 4G and many others to follow it’s got a 2.0Ghz Core M, 4GB’s of RAM, 64GB or 128GB sata3 ssd. But the more interesting feature is it has two full sized usb ports, one of which is usb 3.0 spec (Shame they both aren’t). The tablet has it’s own keyboard dock, stand and case all in one job. The battery capacity figure is an unknown, but they claim 8 hours of battery life.

The real treat was at the even of the live event, Onda announced they will be making an Onda v919 Core M model for release in June. It’s going to be a 4:3 ratio 9.7″ Retina tablet liek the old version, however with 4GB of ram and a 14nm 5Y10 Core M. Looks interesting, I love that high resips 4:3 iPad air panel and adding the power of a Core M to it looks like it could be a real winner. I just hope they don’t use the same V919 Air 3G case and that horrible removable panel to access the sim and microsd card slots. If they fix that, add dual speakers, usb 3.0 port  and a more premium case for it I think it will sell like crazy if priced correctly. 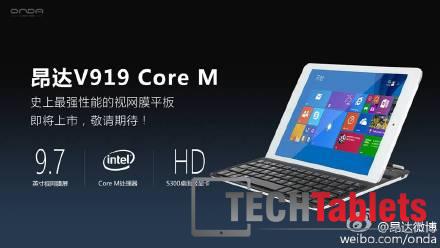 What do you think on a Core M air clone? Should the other Chinese tech companies make Core M retina tablets?