Intel has released a product change notification (PCN) for the current Atom Cherry Trail chips, X5 Z8300, X5 Z8500 and the X7 Z8700. They are to be phased out next year with newer Cherry Trail chipsets that have slightly faster turbo boosts. The graphics naming scheme of these chips has also been changed reflecting Intel’s new naming. They will now be called Intel HD 400 series graphics (12 EUs) and the X7 will graphics will now be known as the Intel HD 405 with 16 EUs. The EU count for the GPU remains unchanged from the previous models.

So the new Atom Cherry Trails will now terminate in Z8X50, so: 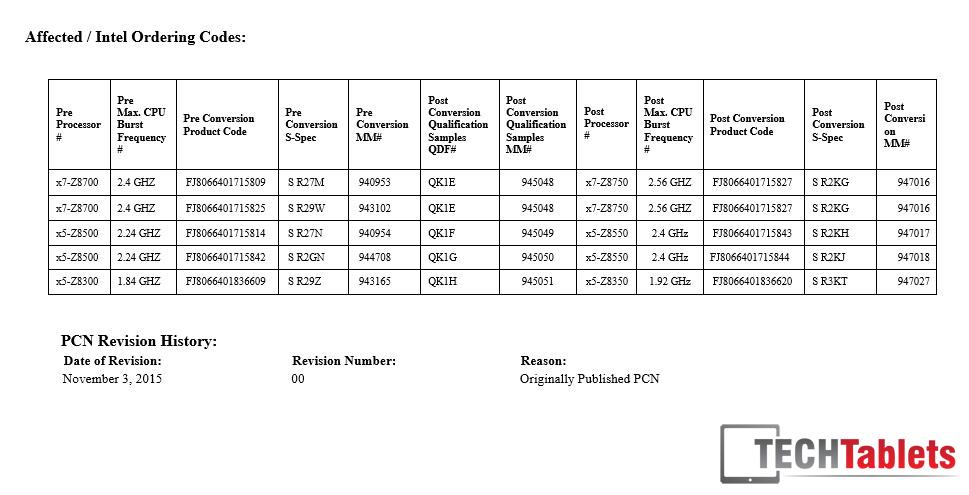 So what’s the reason for the change? Well the PCN states it’s to increase the CPU boost speeds and fix two graphics issues (Alpha Blending and ASTC graphics errors):

So far, I found the power consumption of the new Cherry Trails to be quite disappointing (bar the Surface 3 I reviewed). I hope Intel have improved on this. The new Atom samples are going to be available on the 9th, but it’s not until February/March 2016 that will start to see these new Atom’s shipping in Tablets. The question is will Chinese OEM’s update to the new Atom? Well they will have to once their current Atom ZX 8X00 stock runs out.